The Comics Forum website is two years old today! Following on from last year’s round up of articles, in this post I’ll be providing a review of all the pieces we’ve published this year, and launching the Comics Forum 2013 call for papers.

After a fantastic event last year, I’m pleased to announce that the theme of our fifth conference is ‘Small Press and Undergrounds’. Leeds Central Library has agreed to host the event for a second time, and the call for papers is out now (see below). 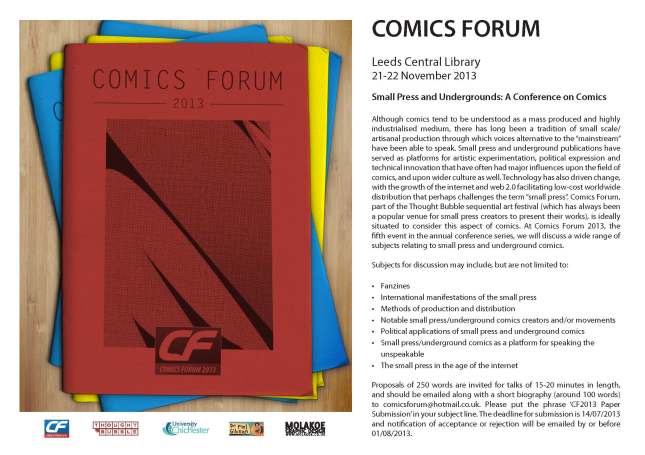 We very much look forward to welcoming a diverse selection of academics, researchers and creators to Leeds for what is sure to be a lively and engaging event covering a wide range of aspects of small press and underground comics. We’re working on lining up a great set of keynotes and will announce them here in due course.

The Comics Forum 2013 page on the website is also online now, and we’ll be updating that with all the details as and when they’re confirmed so keep an eye on that to stay up to date. If you’d like to receive all the latest updates as soon as they’re released you can also sign up to our RSS feed (click the orange button at the top of this box) or put your email address in the box on the right hand side of this page to get every update delivered straight to your inbox.

As in previous years the call for papers was designed by Ben Gaskell of Molakoe Graphic Design. A huge thank you to Ben for his hard work; we think it’s really paid off!

The second year of the Comics Forum website kicked off with the launch of a new set of resources in our Affiliated Conferences section as we added information and documentation from 2011’s Comics & Medicine: The Sequential Art of Illness. Later in the year we added many more conferences to the archive, including: the Dundee Comics Day series, Germany’s Gesellschaft für Comicforschung (ComFor) conferences, Graphic Details Symposium: Talking About Jewish Women and Comics, The International Comics Conference and Women in Comics. The Transitions series also joined the archive, and was the subject of an article by Nina Mickwitz. This archive is open for submissions; if you are a conference organiser (or have been in the past) and would like to archive your conference materials with us we’d be happy to host them. Get in touch at comicsforum@hotmail.co.uk to talk about setting up your archive. Don’t forget that Comics Forum also hosts a number of other resources including a Scholar Directory and a Digital Texts archive, both of which are open to submissions. The Digital Texts section saw a significant update this year with the release of Steven E. Mitchell’s ‘Evil Harvest: Investigating the Comic Book, 1948-1955′, which is available for download in full and for free now.

This year saw the launch of a brand new monthly column in the form of the Comics Forum News Review. Edited by Will Grady and featuring a top line up of international contributors, the review (published on the 4th of each month) launched in November and pulls together all the major stories from comics scholarship around the world. New contributors are always welcome, particularly for countries that aren’t already covered by our existing correspondents, so if you’d like to get involved contact Will at: comicsforumnews@hotmail.co.uk. Year two also saw the continuation of our column in association with major online journal Image [&] Narrative. Charlotte Pylyser, Steven Surdiacourt and Greice Schneider contributed a series of fascinating articles on a wide range of topics including blank panels, comics and poetry, social aspects of comics, Chris Ware’s Lint as a comic strip opera, and the depiction of boredom in comics. Head over to the column archive to read all the instalments in this fascinating series, which will be continuing into the next year.

We were also very lucky to be able to feature articles by a wonderful group of guest authors this year. The study of comics was the subject of my interview with Mel Gibson and an article by James Chapman. Padmini Ray Murray considered the importance of book history for the discipline, and Michael D. Picone looked at the problem of definition. Christina Blanch discussed the massive open online course (MOOC) on Gender Through Comics that she started running in April 2013, while John Swogger considered the possibility of using comics for archaeology, a topic he also spoke on at the 2012 conference. Sara Duke took us on a tour of the comics collection of the United States Library of Congress, demonstrating the importance of looking at original art in an article illustrated with a range of beautiful examples. The intersections of politics and comics came under scrutiny in articles by Cord Scott and Jason Dittmer. Laurence Grove looked at the early history of comics in his guest article, while Martha Kuhlman considered the possibility of avant-garde comics in hers. Elisabeth El Refaie wrote on visual authentication strategies in autobiographic comics, and Louise Crosby and Helen Iball talked about the launch of Laydeez do Comics Leeds.

We also featured a range of case studies, with Malin Bergström discussing Darren Aronofsky and Kent Williams’ The Fountain, Nicolas Labarre taking a detailed look at David Mazzucchelli and Paul Karasik’s adaptation of Paul Auster’s City of Glass and Aletta Verwoerd addressing Art Spiegelman’s In the Shadow of No Towers. Eric Berlatsky looked at homosociality, misogyny and triangular desire in early Superman comics. Other writers who considered specific works included Barbara Uhlig, who looked at Lorenzo Mattotti and Jorge Zentner’s Caboto, and Gwen Athene Tarbox, who talked about the graphic novels of Bastien Vivès. Hannah Miodrag discussed The Long and Unlearned Life of Roland Gethers by Shane Simmon, and Fabrice Leroy talked about Joann Sfar’s Pascin. Most recently, Philip Smith has looked at the use of hybrid languages in Gene Luen Yang’s American Born Chinese.

September 2012 saw the start of a month long series dedicated to the short works of Alan Moore. Edited by Maggie Gray, who also introduced and concluded the collection, Rummaging Around in Alan Moore’s Shorts included articles by Lance Parkin, Daniel L. Werneck, K. A. Laity, and two articles by Marc Sobel. José Alaniz also wrote an article for the series, and later in the year presented a fantastic talk on Death and the Superhero at the Henry Moore Institute in the second of our ‘Comics Forum presents…’ talks.

A number of our guest-authored articles were nominated for 2012’s Hooded Utilitarian Award for Best Online Comics Criticism; a thank you to HU for the nod. The final list of articles can be found here.

Over the next year we’ll be looking to continue expanding our offerings on the website and presenting articles by top writers on the medium. We’ll soon be making available MP3s of the two events in the ‘Comics Forum presents…’ series so far and launching permanent pages for each of these events. Later in the year we have the 2013 conference to look forward to, and members of the Comics Forum team will also be hosting a table at the Thought Bubble sequential art festival as we did in 2012. This was great fun last year; thanks to everyone who came over to see us for a chat! I will also be speaking on comics scholarship and Comics Forum at Laydeez do Comics Leeds on the 20th of May (next Monday). The event takes place at Wharf Chambers in Leeds from 1830-2130; do come along if you can.

A massive vote of thanks to all our readers, authors and guests. We really appreciate your support for Comics Forum and it’s only thanks to you that the conference and the website are able to continue and develop. Suggestions and comments are always welcome either through the comments section on website posts or by email to comicsforum@hotmail.co.uk. I would also like to extend my personal thanks to the whole Comics Forum team, who have been generous enough to give a lot of time and effort over the years to make sure the conference and website run smoothly.

Here’s to another wonderful year.