RSS
← The Colonial Heritage of Comics in French by Mark McKinney
Learning from Film Studies: Analogies and Challenges by Randy Duncan and Matthew J. Smith → 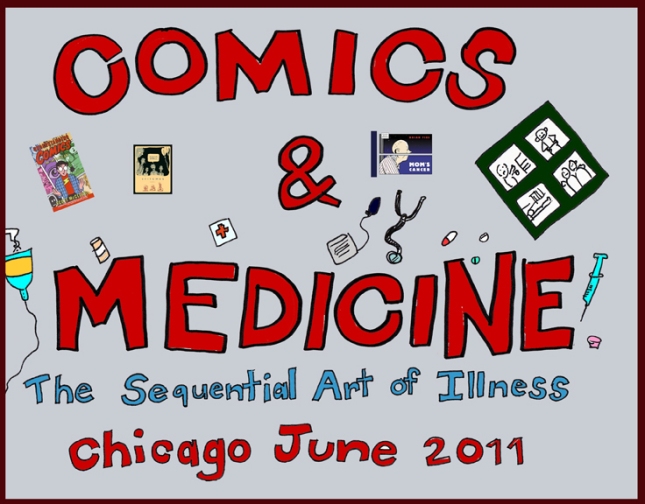 What we learned at our conference in Chicago is that there is a surprising amount of fascinating work being done, around the world, involving the use of comics in medicine.

Graphic Medicine.org creator Ian Williams (aka Thom Ferrier) covered a portion of what was presented in his excellent post about the Chicago 2011 Comics & Medicine conference on the BMJ blog site. No one person could attend all the sessions at the conference, an unfortunate necessity of a great conference on a great topic.

This meant every attendee had a unique experience of the conference but had to miss much more than they might have liked.

Fortunately, we have some good quality audio recordings from the conference. I’ve enjoyed the opportunity to relive some of the lectures through them.

I’d like to focus on Stitches creator David Small’s keynote address at the Chicago conference, which I found so thought provoking and creatively inspiring I decided to transcribe it.

I first read David Small’s masterful graphic memoir, Stitches (2009, W.W. Norton) when a friend who knew David’s work, and also knew I was teaching medically-themed graphic narrative, sent me a copy. Stitches is David’s first graphic memoir, and follows his fifty-book long career as an illustrator. David has won the top awards of children’s book illustration, including the Caldecott Award and the Caldecott Medal. He has also been awarded The Christopher Medal. His illustrations have appeared in The New Yorker and The New York Times.

Jules Feiffer said of Stitches, “Like the boy in this autobiographical novel, my first reading of Stitches left me speechless and in awe. David Small presents us with a profound and moving gift of graphic literature that has the look of a movie and reads like a poem.”

David opened his keynote talk by showing us this brief film on YouTube as an introduction.

This video gives you a bit of an introduction to the plot of the book, which basically is that David was given cancer as a child by his father, a radiologist, who, following the protocol of the day, repeatedly irradiated young David for chronic sinus infections.

The book also brilliantly displays the dysfunction of David’s childhood home, in which he had no voice – figuratively, and, as a result of the surgery for his neck cancer, eventually also literally. David retreated to his drawing, which, in combination with adolescent and adult psychotherapy, saved his life.

David said shortly after the video presentation that, “I didn’t really understand why I was invited to this conference. I know you’re all doctors, or have something to do with medicine, some interest, but the whole idea of comics in medicine seemed a little far out. Until we got here last night. It all became immediately clear looking at the art, the range of subjects, the range of approaches to illness and doctoring by both victims of things, patients, and practitioners.”

The art exhibit David refers to here contains enlarged pieces of artwork taken from seventeen texts discussed at the conference. Statements from the creators of each graphic narrative hung with their piece. As David points out, enlarging the comics to 18×24 and putting the content under spotlights in this way had an even more powerful impact than, I think, even the conference organizers anticipated.

David then went on to make three specific points that arose from making his book that should be of special attention to people in the medical profession. “First of all,” he said, “I think it bears examination, the whole idea of doctors who treat their own families.”

“Second category: the omnipotence factor in doctoring.” David cites two examples in Stitches where the arrogance of the doctors around him, first and foremost being his own father, clearly caused him great harm.

David’s third point was about his psychoanalyst, who appears in Stitches as a white rabbit. David credits his analyst with turning around the life of a very angry, very sad young man. David believes that his psychoanalysis was successful for two reasons, because the therapist was willing to cross professional boundaries — to do such things as take young David shopping because, “my parents had never taught me how to buy anything” and second because David’s therapist had loved him. Being loved by his therapist taught David how to love himself – and this enabled David to complete this very challenging memoir years later.

As far as the creative process that brought Stitches to life on the page, David said, “I’ll tell you how I went about it. I didn’t go about it.” He went on to describe his desire to write a memoir, and the process of writing one story from his childhood, what he thought was the only thing he remembered. It was a text version of the sequence pictured in the art exhibit, in which six-year-old David is wandering in a forbidden area of a hospital after hours and stumbles upon a fetus in a jar. He imagines that the tiny fetus crawls out of the jar and begins chasing him. He gave this story, as prose, to his editor. She was thrilled, and for ten years afterwards, asked how his memoir was coming. He would say it was coming well, but in reality was not working on it at all. “I knew I couldn’t face it. I knew I couldn’t face it as a prose piece. Drawing, for me, is like falling off a log. Writing, for me, is very hard. I start a paragraph, and all of a sudden I become Flaubert, going over every word, changing. Words, no. Pictures, always.” But David didn’t see how his memoirs could work in pictures.

But then he took a trip to Paris, and visited a friend whose son Pierre was working on his first graphic novel. “I had seen a few graphic novels, but I didn’t have any ideas that had Batman in them, so I’d dismissed them. Plus they looked like a whole hell of a lot of pictures to draw. I remember looking over Pierre’s shoulder, thinking, ‘Yup, that’s a whole hell of a lot of little pictures, and I’m never going to do that.’” Then Pierre gave him a few graphic novels that he thought would have more resonance for David. He was given Léon La Came by Sylvain Chomet and Nicholas DeCrècy, Mitchum by Blutch, Notes for a War Story by Gipi, and Blue Pills by Frederik Peeters. “Pierre knew I was an appreciator of fine art and fine storytelling, and he really handed me the right books.”

David then described the routine that eventually led to Stitches. He would work in his studio all day on his children’s illustration projects. Then he would come home, “make myself a martini, and start working on my memories in panels. It turned out to be a lot of fun, because I got to be the film maker that I’ve never had the chance to be.”

As he was bringing back to life his unpleasant childhood through his drawings, the project became more difficult. “It became chaos. Because life is chaos, memories are chaos.” He went on to say, “You eventually have to turn your life into a story arc, and realize you’re making a piece of fiction out of something when your whole intention was to tell the truth and nothing but the truth. That was my intention. I finally came to a point where I understood that what I really needed to get to was verisimilitude and not absolute truth. Because absolute truth would be fifteen hundred pages and extremely boring.”

Fortunately, David produced the exceptionally un-boring Stitches. It is an astonishing work and a great contribution to Graphic Medicine.

MK Czerwiec (sir-wick) worked as an AIDS nurse from 1994-2000. When antiretrovirals enabled her Chicago AIDS ward to be closed, she started making comics under the pseudonym Comic Nurse. Czerwiec then earned an MA in Medical Humanities and Bioethics. She teaches “Drawing Medicine” at Northwestern Medical School and is working on an illustrated oral history of the AIDS crisis, “Taking Turns: A Medical Tragicomic.”

← The Colonial Heritage of Comics in French by Mark McKinney
Learning from Film Studies: Analogies and Challenges by Randy Duncan and Matthew J. Smith →