Note: all translations are the author’s own.

Corrections Class (Klass korrektsii, d. Ivan Tverdovsky, 2015) is a hard-hitting film about disability in Russia. In one scene, a mother, Svetlana Viktorovna (Natalya Pavlenkova), struggles to push her paraplegic teen daughter Lena (Maria Poyezhayeva) in her wheelchair up a two-track cement ramp outside her high school. But the ramp, which we had seen in the process of construction earlier in the movie, has a fatal flaw: a gap of several inches between it and the sidewalk – too wide for a wheelchair to overcome. Worse than useless, the ramp is a spit in the face, a bureaucratic nod to inclusivity with no actual follow-through. It drives Svetlana Viktorovna, who has more than enough troubles in her life, to hiss with rage: “Thank you very much, my dears. Great job.”[1] Equal parts maudlin melodrama, documentary exposé and black farce, the scene is not exactly fiction (though the film is). It had a real-life basis.

In the fall of 2012, a popular series of memes emerged on the Runet (Russian internet): pictures of the many inaccessible spaces for wheelchair-users in Russian cities, turned into absurdist set decoration by ramps built impossibly steep; ramps with trees and other objects blocking the way; broken ramps with wide cracks; and ramps leading to/from nowhere (e.g., into walls). “The inaccessible-ramps meme gained popularity not as [a] representation of the problem of disability inclusion in Russia,” wrote anthropologist Cassandra Hartblay, “but as a joke about the country’s infrastructure, ironic evidence of dysfunction in Russian daily life” (“Good”: 3).[2] Hartblay goes on to call the ramps “an overdetermined symbol, or a red herring for access” in postsocialism (“Good”: 4).

As the makers of Corrections Class knew, it could also serve as an arresting subject for drama. In 2017, the mainstream comics publisher Bubble also foregrounded disability in a way not previously seen. In its “Second Breath” initiative, when it revamped and relaunched many of its series. The title Red Fury, fronted by sexy super-spy Nika Chaikina, was replaced with Allies (Soyuzniki), an ensemble series that featured Chaikina and her team of operatives. That wasn’t the only change.

As readers learned early in “Before the Dawn,” the first story arc, their beloved heroine had undergone a harrowing ordeal. She awakes, after horrible dreams, in a hospital, surrounded by doctors. The events at the end of the Red Fury series (a battle involving zombies) have resulted in unthinkable trauma: Chaikina has lost both legs above the knee. Unable to accept the new reality, the recent amputee lashes out, screams in horror, tries to wish it away in a storm of emotions that lasts the entire first issue of Allies.[3]

Much of the critical and fan reaction to this turn of events focused, curiously enough, on two things: Chaikina’s “helplessness” and her drastic loss of sex appeal. Reviewer Alexander Talashin, for example, wrote: “[T]he girl tries to convince herself that it’s just a bad dream. But the doctors convince her of the opposite: the once beautiful thief and secret agent Red Fury is now a helpless invalid” (“Komiks”). A reviewer at Wicomix warned that the stark revelation of Chaikina “turned into a gray, ailing shadow of herself” will “cast the unprepared reader into a state of shock” (“Retsentsii”).

Indeed, our heroine’s portrayal in Allies differs markedly from what we saw in the previous series. Chaikina often appeared in skintight catsuits or revealing outfits, her bosom and posterior quite available to the gaze. The cover of #11 (August, 2013)[4] showed her in a skimpy bikini made of jungle foliage, her hand coyly up to her mouth, while the cover to #18 (March, 2014) as well as to the third trade paperback collection (2015)[5] somehow lets the gazer look through the fabric of her pants, at a thong cleaving her buttocks.[6] А variant cover to #28 (January, 2015) by Konstantin Tarasov features her in the infamous brokeback pose.[7] And the covers did not lie; more of the same awaited the reader in the stories. In short, cheesecake galore.

But now, in her hospital gown, she looks thin and wan (not voluptuous as before), with two chief expressions: wide-eyed bewilderment and profound gloom. (Later, as she tries to escape what she realizes is a fake hospital, grim determination takes over.) A “tragic” alternate cover to Allies #1 shows Chaikina downcast in her wheelchair, recalling her former partners and adventures, imagery of which dominates the space above her. The cover communicates that Chaikina’s life as a hero and as a woman is effectively over.[8] 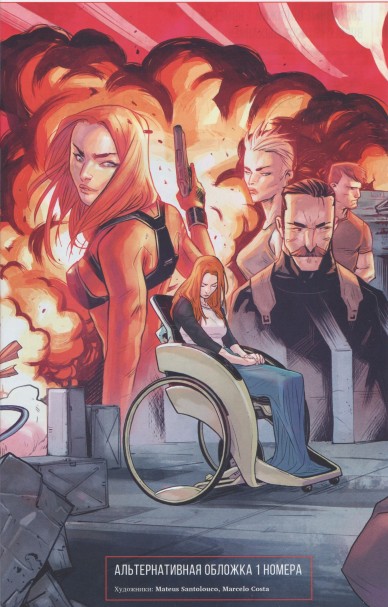 She herself seems to believe that. When a doctor tries to console her by saying, “You’re not dead,” she replies with: “I don’t even know if that’s a plus …” He holds out the possibility of prosthetics: “We can help you to get back up on your feet. Literally. If you’ll let us …” She answers, looking away, “What if I don’t want to get back up?” (Devova/Erofeeva, Soiuzniki: n.p.).

A dichotomous two-page sequence in Allies #1 achingly visualizes Chaikina’s new sense of vulnerability and life as an amputee. In verso, a series of seven thin tiers depict her drab routine in the hospital bed: physical therapy, exams, bathing, feeding “day after day.” Facing in recto, in sharp contrast, we see a splash page of Nika in her bed, reaching up and linking hands with her ghostly idealized self (with legs), who dangles down from a wire, the hospital’s ceiling transformed into a wavy, fiery-red circus tent. She is escaping into her past, notes the former Red Fury in a textbox, “where I can pretend that I’m still capable of doing something …” But a song whose lyrics accompany the imagery casts a dark shadow on Nika’s fantasies. “Easy Street,” by the Collapsable Hearts Club, had not long before appeared in Season 7: Episode 3 (2016) of The Walking Dead – in scenes of torture; Nika has quite a ways to go to abandon her lost identity as an able-bodied person and accept who she is now, with all her gifts. (That journey begins soon enough as she utilizes her battle skills to aid in her own rescue.)

For all its ableist presumptions about the value (or lack of it) that accrues to particular types of bodies (especially young female bodies), the opening chapters of “Before the Dawn” represent a fascinating turn in Russian mainstream comics’ portrayal of disability – all the more remarkable for taking place in the action-adventure genre, still more so for its maiming of a (let’s face it) ‘soft-porn’ heroine.[9] The Wicomix reviewer repeatedly used the word “realistic” in their assessment, as in “a realistically portrayed … swamp of hopelessness and despair.” For all the angst, or indeed because of it, the reviewer sees in Chaikina’s misfortune a step forward for the character and the genre, well worth

the pain, tears, panic and hysteria of a much-loved heroine, who from a sex symbol, a clone of Lara Croft and an intrepid spy, has suddenly transformed into a living and fragile person … Nika’s fans are probably not too happy to see her like that, but this condition, without a doubt, provides the comic with drama – real, hard-earned, not false at all (“Retsentsii”).[10]

It would not be the first time mainstream comics readers have linked disability with greater “realism,” a hallmark of the US superhero genre since the 1960s.[11] But Allies’ “progress” in this regard followed similar breakthroughs in the alternative sphere and other sectors of the industry; the same year as “Before the Dawn,” I Am An Elephant!, the first graphic novel devoted to the disabled experience, written by a wheelchair user, saw release.

With 21st-century Russian readers’ increasing acceptance of comics – for decades derogated as a “foreign,” half-literate medium – the amount of graphic narrative work by marginalized groups grew as well, in particular since Putin’s 2012 return to the presidency. The accessibility, visceral impact and easy dissemination of comics (especially through the internet) made them an attractive vehicle for voices and imagery otherwise occluded in contemporary life. Devova/Erofeyeva’s Allies formed part of a vanguard of graphic narrative by and about the disabled – a population itself long ignored in mainstream Russia.

[1] See Alaniz, “Corrections” for a detailed discussion of disability in post-Soviet Russian cinema.

[2] International athletes who came to Sochi for the 2014 Paralympics reported similar disappointing encounters with Russian infrastructure, despite the unprecedented coverage and popularity there of the games themselves (See Bernstein, “Ramp”). Times had changed. The Soviets refused to take part in the first Paralympics in 1980, on the grounds that, as one representative put it, “There are no invalids in the USSR!” (Phillips, “There”).

[3] For discussion of similar trauma scenes in US Silver and Bronze Age comics, including in Fantastic Four and Tales of The New Teen Titans, see Alaniz, Death, Disability: Chapter 4.

[4] By Mike Krome and Sabine Rich.

[6] Red Fury was originally drawn by Oleg Okunev, who according to publisher Artyom Gabrelyanov based her look on “the redheaded girl with large breasts” (Christina Hendricks) in the US TV series Firefly (2002-2003) (Cherniavskiy, “Artem”).

[7] On the “brokeback pose” representation of women in superhero comics, see Cocca, Superwomen: 12.

[8] The supposed incommensurability of disability with superheroic adventure is reductively summed up in  Talashin’s remark:“[I]t’s hard, after 50 issues of whirlwind action, to see Chaikina in a hospital bed” (“Komiks”).

[10] Bubble editor Roman Kotkov called “Before the Dawn” “a complex story about a person who had everything, and suddenly loses it all (including her legs) and tries to find herself in a world of mutants and superpowers … one of the most emotional and powerful comic books we’ve ever done” (Parker, “Russia”).

[11] On the use of disability for dramatic purposes and “heightened realism” in Silver/Bronze Age superhero comics, see Alaniz, Death, Disability: Chapter 2 and passim.

—. Death, Disability and the Superhero: The Silver Age and Beyond. Jackson, MS: University Press of Mississippi, 2014.