One year ago today, comicsforum.org launched with this introductory post. Today I’m pleased to present a look back at the past year of articles by major comics scholars from around the world, and a look ahead to what’s coming next for Comics Forum, including our annual conference.

First up, I’m delighted to release the call for papers for Comics Forum 2012, which as usual will be taking place in Leeds (UK) as part of the Thought Bubble sequential art festival this November. 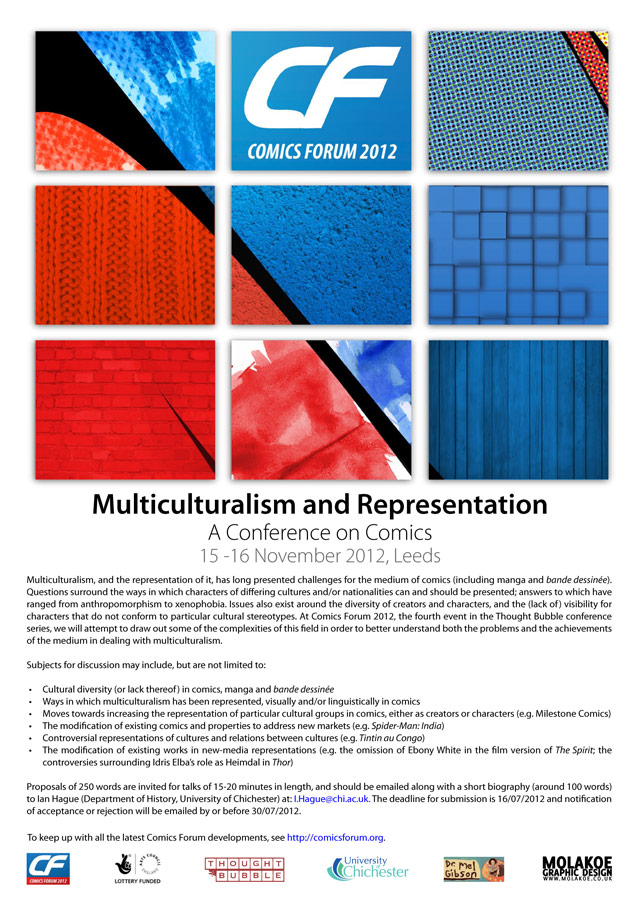 Click here for a PDF version of this CFP.

This is the fourth Comics Forum conference, and it promises to be another very engaging event, with scholars and creators coming together to establish dialogues and fruitful collaborations. We’re working on lining up some wonderful keynote speakers, and will have more news on that and other developments on the brand new Comics Forum 2012 page in coming months. To keep up with all the latest developments, keep checking the homepage, or subscribe by email or RSS to be informed whenever we post new content (you can subscribe using the form in the column on the right hand side of this page).

The call for papers was designed by Ben Gaskell of Molakoe Graphic Design, and as always he’s done a great job. Many thanks to Ben for his hard work on this.

Comics Forum’s first year online has seen a wide range of subjects being addressed in posts by a mix of established scholars and new up and comers. Our first guest post came from Clark Burscough of Thought Bubble, who gave an insight into the convention’s history and the thriving community of comics creators and fans that have helped it become one of the UK’s top annual comics events in just a few years. Thought Bubble 2012 looks set to be the biggest year yet, with a great line-up of guests; well worth a visit!

Fans and the sociological and community aspects of comics also provided the focus for articles later in the year, with Dan Berry pulling out some of the major themes to emerge from his interviews with over 40 comics industry figures, Benjamin Woo discussing the possibilities for mapping the spaces of comics, and Simon Locke and Casey Brienza engaging in a spirited debate around the complexities of establishing a sociological understanding of the comics field.

The study of comics also came in for some scrutiny, with Ernesto Priego and Randy Duncan & Matthew J. Smith considering how the burgeoning field of Comics Studies can continue to grow. More personal accounts of the growth of comics scholarship came from David Huxley and Rob Weiner, and Chris Murray talked about setting up the first MLitt course on Comics Studies in the UK. Sarah Lightman discussed the Women in Comics intiative, Paul Register outlined the genesis of the UK’s Stan Lee Excelsior Award for graphic novels, and Corinne Pearlman provided a brief history of Sussex cartoonists organisation Cartoon County. We also had reviews of July’s major international conference on comics in Manchester from Joan Ormrod, Julia Round and Matthew Screech, and a review of Comics Forum 2011 from John Swogger. Tony Venezia wrote on the annual Transitions conference and discussed the ‘indisciplined middle space’ that comics occupy. We also heard about comics scholarship internationally, with Daniel Stein and Lida Tsene discussing the situations in Germany and Greece respectively.

French language comics were discussed in a number of articles. Ann Miller presented a fascinating overview of the troubles being experienced by eminent French publisher L’Association, and Mark McKinney considered the colonial heritage of comics in French. Catriona MacLeod outlined the history of the ‘forgotten French feminist comics magazine’ Ah! Nana, and we also heard from noted comics herstorian and contributor to Ah! Nana, Trina Robbins.

Other issues considered on the blog included the various ways in which we can think about comics. Aaron Meskin presented an overview of philosophical approaches, while Hannah Wadle and José Alaniz looked at the applications of comics in the field of anthropology. Laurike in ‘t Veld wrote on genocide in comics. Rikke Platz Cortsen discussed the presentation of hospitals and illness, themes also taken up (amongst others) by Ian Williams, Maria Vaccarella and MK Czerwiec in our Graphic Medicine column. Karrie Fransman also addressed issues of representation of the body in a two part video on her graphic novel The House That Groaned.

The overlaps between comics and other media were the subjects for posts from LJ Maher, who wrote on comics and transmedia narratives, Joe Sutliff Sanders, who discussed allusion in comics, and Zara Dinnen, who considered the presence of comics in the works of ‘two Jonathans’: Jonathan Letham and Jonathan Franzen. Kirstie Gregory and Paul Atkinson looked at the relationships between sculpture and comic art in our second regular column. Daniel Merlin Goodbrey considered possible future directions for comics. The deconstruction of Superman undertaken by Steven T. Seagle in It’s a bird… was the subject of an article by Esther Claudio Moreno, while Charles Forceville looked at the visualization of anger in comics. Greice Schneider discussed the role of boredom in the production of comics, a theme she has also picked up on in our latest ongoing column, Image [&] Narrative, in association with the online journal of the same name. Greice’s co-writers on the column are Charlotte Pylyser and Steven Surdiacourt.

We also launched a number of online resources for comics scholars in year one. Our affiliated conferences section set up with a number of downloadable documents and audio files from the Comics & Conflicts conference at the Imperial War Museum last August. Next week we’ll be launching our second affiliated conferences page, providing downloadable content from last year’s conference ‘Comics & Medicine: The Sequential Art of Illness’ in Chicago. If you are a conference organiser and would like your event to be included in our affiliated conferences section, drop us an email at comicsforum@hotmail.co.uk so we can set it up. Our digital texts section provides free downloads of academic works on comics. Already in place are texts by Ian Gordon and Daniel Raeburn, and we will be looking to expand our selection over the next year. Finally, our scholar directory offers all comics scholars the opportunity to get listed, and to find out who’s researching what. If you’re not already listed in the directory, you can download a data form here to be added.

Over the next year we’ll be looking to expand our current offerings and add more resources, as well as continuing to provide a varied lineup of guest authors and news updates from around the scholarly community. Coming up in September we have a special themed month of articles on the short works of Alan Moore, and there’s still time to get your proposals in if you want to write something for that; the call for papers is available here. We’re also planning to continue our lecture series, which launched with a great talk on comics and philosophy by Aaron Meskin and Roy Cook at the Henry Moore Institute in Leeds this March. In addition to Comics Forum 2012, we’ll also be running a table at this year’s Thought Bubble convention so whether you’re an established scholar or you’re interested in getting started studying comics and don’t know where to begin, come and say hello!

A huge thank you to all our readers and authors over the past year; your comments and encouragement are much appreciated, and it is only thanks to your support that comicsforum.org has been able to get off to such a strong start. Here’s to another great year!

One response to “Comics Forum Online: Year One Review and Comics Forum 2012 Call for Papers”