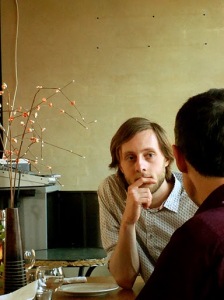 Lecturer in Contextual and Theoretical Studies, University of the Arts, London (London College of Communication)

Editorial Board Member, Studies in Comics; Peer Reviewer, The Journal of Graphic Novels and Comics

Dr Ian Hague is a lecturer in Contextual and Theoretical Studies at the University of the Arts, London, where he is based at London College of Communication. He is also a practicing graphic designer and illustrator, and works as a PowerPoint Designer at OgilvyOne Business.

He is the founder and director of Comics Forum, and was the director of the organisation’s annual conference from 2009-2014, transitioning to be a member of the conference committee after that point. He was the editor of the website from 2011-2014, and remains involved in the site as a general editor.

Comics and the Senses: A Multisensory Approach to Comics and Graphic Novels(Routledge 2014).

‘Drawing “the apprenticeship of a man of letters”: Adapting Remembrance of Things Past for bande dessinée’ in Transforming Anthony Trollope: Dispossession, Victorianism and 19th century word and image (Leuven University Press 2015).

‘From Comic Strips To Graphic Novels: Contributions To The Theory And History Of Graphic Narrative, edited by Daniel Stein And Jan-Noël Thon’. European Comic Art7.1 (2014), pp 112-116.

(Co-presented with Simon Grennan) ‘Medium, knowledge, structure: capacities for choice and the contradiction of medium-specificity in games and comics’presented at Poetics of the Algorithm: Narrative, the Digital, and ‘Unidentified’ Media, University of Liège, Belgium, 16-18/06/2016.

Keynote Address: ‘Culture at Risk? Collectors, Ownership and Comics in the Digital Age’ presented at Comics in Culture/Culture in Comics, Uniwersytet SWPS (University of Social Sciences and Humanities in Warsaw), Poland, 03/06/2016.

Panel Chair: From Hogarth to Hellboy: The Transformation of the Visual Reader, Senate House Library, 16/12/2015.

Keynote Address: ‘Squares, Circles and Dirty Windows: A Toolkit for Studying the Materiality of Digital Comics’ presented at Materiality and Mediality of Contemporary Comics, University of Tuebingen, Germany (24-26/04/2015).

(Co-presented with Simon Grennan) ‘The Known Unknown: reading and playing across the boundaries between games and comics’ presented at the 9th Annual Conference of the Gesellschaft für Comicforschung, Berlin, 25-28/09/2014.

‘Drawing ‘the apprenticeship of a man of letters’: Adapting Remembrance of Things Past for bande dessinée’ presented at the International Association of Word and Image Studies conference 2014, University of Dundee, 11-15/08/2014.

‘“I do love the smell of that old newsprint”: Smell and Nostalgia in Comics’ presented at the Joint International Comics and International Bande Dessinée Society (IBDS) Conference, University of Glasgow/University of Dundee, 24-28/06/2013.

Invited speaker on student experience panel at The PhD Journey, University of Aberdeen, 05/11/2012.

‘Eye Like Comics: Ocularcentrism and the Ideal Perspective in Comics Studies’ presented at the 7th Annual Conference of the Gesellschaft für Comicforschung(Society for Comics Studies), Institute for Media Culture Studies, University of Freiburg, 28/09/2012.

‘Comics and the Senses’ presented at Life Beyond the PhD, Cumberland Lodge, Windsor Great Park, Berkshire, 30/08/2012.

This paper was selected as one of four ‘Pick of the Presentations’ papers at this conference.

‘Comics as a Tactile Medium: Functions of Touch in Experiences of Reading’ presented at ‘First International Conference on Comics and Graphic Novels: Sites of Visual and Textual Innovation’, Instituto Franklin – Universidad de Alcalá, 10/11/2011.

‘“Comics is [not] a mono-sensory medium”: multisensory aspects of comics and graphic novels’; guest lecture presented at the University of Dundee, 28/10/2011.

I was also a speaker on the plenary roundtable discussion at this conference.

This paper was also presented at the University of Chichester’s Research in Progress conference, 15/05/2010 (see Administration Experience).

‘The Manhattan Perspective: Sequence and Simultaneity in Comics and Film’ presented at Framing Film: Cinema and the Visual Arts, University of Winchester, 06/09/2009.

‘Comics and the Linearity of Time’ presented at Timeframes: The Third Annual Dundee Comics Conference, University of Dundee, 28/06/2009.

‘Small Press and Undergrounds: A Conference on Comics’ (2013)

‘Multiculturalism and Representation: A Conference on Comics’ (2012)

Comics Forum 2011 (incorporating ‘Sculpture and Comic Art’, ‘Graphic Medicine: Visualizing the Stigma of Illness’, and ‘Materiality and Virtuality: A Conference on Comics’)

Comics Forum 2010 (incorporating ‘Women in Comics II’ and ‘Theory and Practice: A Conference on Comics’)

Possibilities and Perspectives: A Conference on Comics (2009)

2009-2011: Student Representative for the Faculty of Business, Arts and Humanities on the University Research and Scholarship Committee, University of Chichester.