RSS
← Comics Scholarship 2.0 by Ernesto Priego
The Reinterpretation of the superhero in Seagle and Kristiansen’s ‘It’s a bird’ by Esther Claudio Moreno →

Graphic Medicine #1: Of Comics, Disease and Stigma by Ian Williams

Hello and welcome to the Graphic Medicine component of the Comics Forum blog. My name is Ian Williams, I’m a comics artist, writer and doctor and I run the website graphicmedicine.org. With my colleagues Columba Quigley and Maria Vaccarella, I am organizing day 2 of the 2011 Though Bubble Comics Forum – Graphic Medicine: Visualizing the Stigma of Illness. In future weeks Columba will be contributing to the blog, as will our transatlantic collaborator MK Czewiec, aka ‘Comics Nurse’ who will be flying over to take part in the conference.

We are hoping the conference will be attended by comics scholars, healthcare professionals comics artists and, well, anyone with an interest in the interface between comics and healthcare. This should be a truly interdisciplinary meeting which will follow on from the outstanding success of our conference in London last year and the second international conference on Comics and Medicine: The Sequential Art of Illness which will be taking place in Northwestern University, Chicago as this piece is posted: the 9th to the 11th of June.

Thanks in part to the Health Humanities movement many medical schools now encourage the reading of classic literature to gain insight into the human condition. The medium of comics (referred to in the plural) is beginning to attract attention from healthcare scholars, as evidenced by an expanding body of academic literature on the subject and conferences held which examine specifically the interaction between comics and healthcare.

Among the growing number of works of graphic fiction, titles dealing directly with the patient experience of illness or caring for others with an illness are to be found. Indeed, the sheer volume of published works containing subject matter relevant to healthcare professionals seems to invite some sort of critical examination from a healthcare studies viewpoint. Some works, such as David B’s Epileptic (2006) or Charles Burns’ Black Hole (2005) are already hailed as classics. These works constitute an important resource, opening a window into the lives of those affected by illness. Comics, as a popular mass medium, also reflects society’s conception of healthcare at any one time, and as a vehicle for radical ideas, comics will also inform the cultural image of healthcare professionals.

All diseases cause stigma. While healthcare professionals and carers might strive to treat the physical or psychological effects of illness, stigma, a cultural effect, is often ignored. Stigma can be borne by the family, relatives, associates and even the carers of the sufferer, as well as the afflicted individual. While talking about it weakens its effect, stigma is a source of shame, bigotry and injustice and can, in some cases cause far more suffering than the disease or condition itself. It is a neglected area of study and comics, with its radical history and sophisticated mixture of text and graphics, allowing the articulation of subtle and complex insights into human behaviour and thought, might prove an ideal medium through which to examine the subject.

I started writing about comics and medicine, an area of study I christened ‘graphic medicine’ while writing the dissertation for my MA in Medical Humanities. I found so many graphic novels and comics with medical content I set up graphicmedicine.org to list them and briefly review them, to act as a resource for the healthcare and comics communities. Fairly soon, enthusiasts and scholars from all over the world started to contact me. One of the first was Prof Michael Green from Penn State Medical School dept of Medical Humanities. Michael was already at that time teaching a class on comics to his medical students and getting them to make strips about their experiences. Around this time, at the Association of Medical Humanities Annual Conference in Durham I met two scholars- Dr Maria Vaccarella, a post doctoral fellow at Kings College, and Dr Columba Quigley, MD who was taking an MA in Literature and Medicine at Kings. Maria and Columba were both studying comics too. We talked and during those few days the idea for our London conference was born. We contacted Michael, who brought in his colleagues Susan Squier and Kimberley Myers from Penn State, and joined by our UK colleagues Giskin Day and Bob Tanner, the conference took shape. Brian Fies, Paul Gravett and Marc Zaffran were invited as keynote speakers and Darryl Cunningham and Phillipa Perry came along to talk about their work. 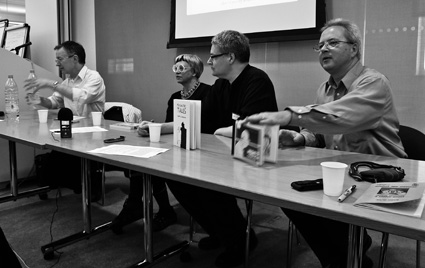 We had expected maybe 40 delegates, but on the day we were full to capacity, with 75. What we hadn’t quite expected was the tremendous buzz of excitement as comics artists rubbed shoulders with educationalists, scholars, journalists and healthcare professionals. Delegates flew in from all over the world. Among them being one MK Czerwiec, a nurse who had been documenting her care of HIV patients in comics form for many years. MK went on to lead the organization of the 2nd conference in her home town of Chicago, with keynote speakers Scott McCloud, Phoebe Gloeckner and David Small.

We hope you will consider replying to our call for papers, and coming along on the 17th of November to what should be great day of interdisciplinary discussion and debate.

Ian Williams is the co-director of Graphic Medicine: Visualizing the Stigma of Illness, taking place at Leeds Art Gallery on the 17th of November as part of Comics Forum 2011.

← Comics Scholarship 2.0 by Ernesto Priego
The Reinterpretation of the superhero in Seagle and Kristiansen’s ‘It’s a bird’ by Esther Claudio Moreno →