A Survey of Flemish Comic Strips Under Nazi Occupation

By Way of Introduction…

In 1940, the quiet beginnings of Flemish beeldverhaal (that is to say, bande dessinée in Dutch) almost came to nothing. The German invasion of Belgium in May 1940 had something to do with it, putting an end to several publications of this kind, thus depriving several illustrators of their livelihood and leaving them unemployed.

END_OF_DOCUMENT_TOKEN_TO_BE_REPLACED

Poetics of the Algorithm: A Report 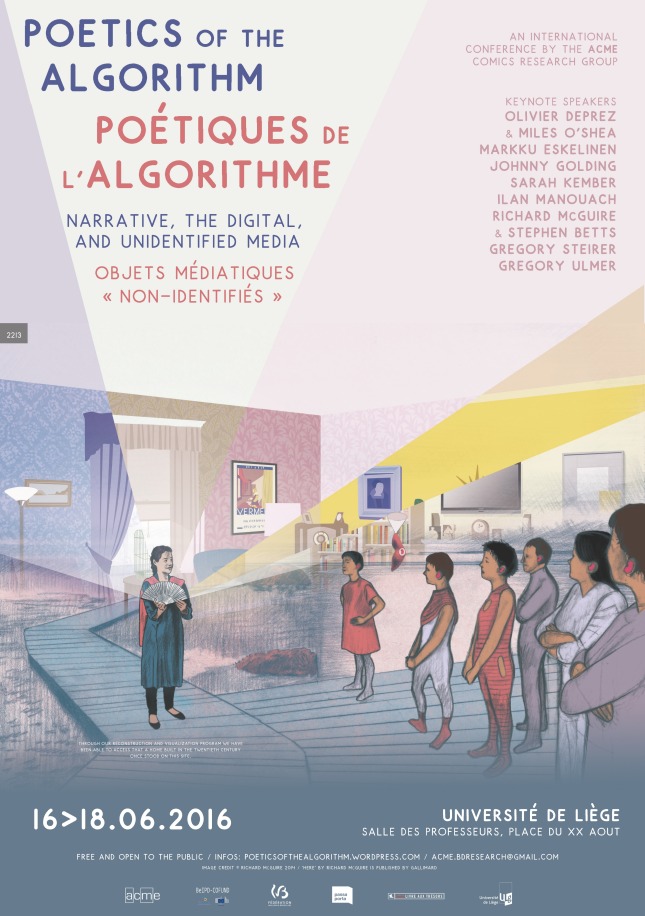 In June 2016, for three days, scholars from all over the world met at the Université de Liège for a ground-breaking bilingual conference on digital media. The starting points for the discussions were several challenging questions about the way storytelling is evolving with the adoption of new technologies on the part of  artists and writers. Poetics of the Algorithm was mainly concerned with the ways in which medial creations are changing, the impact these changes have on viewers and readers and how humanities scholars should deal with this paradigm shift. The ethical implications and the political consequences of the current state of digital creation were also fore preoccupations of the organisers Aarnoud Rommens, Benoît Crucifix and Björn-Olav Dozo when they set up this project.

END_OF_DOCUMENT_TOKEN_TO_BE_REPLACED

Posted by Annick Pellegrin on 2017/03/09 in ACME, Conference reports

Tightrope Walker During the Occupation – Part 4/4[1]

Les Aventures du professeur Nimbus by Daix came to an end on 17 August 1944 with Le Matin that fell apart in the besieged capital.[3]

Daix went into hiding and fled from Paris. His residence was searched. An arrest warrant was issued against him on 12 July 1945 for acts prejudicial to the security of the State. Daix, not having been apprehended, was judged in absentia at the court of justice of the Seine department on 8 January 1946. The exposé that led to this condemnation summarised the charges: Daix was a “collaborateur notoire” [notorious collaborator]. The tribunal reproached Daix for his denunciation of cartoon animators, and his involvement in 1942 in the “organe pro-allemand” [pro-German organisation] La Voix ouvrière made matters worse for him. But his drawings of Nimbus would be judged as not containing political propaganda.

END_OF_DOCUMENT_TOKEN_TO_BE_REPLACED

Tightrope Walker During the Occupation – Part 3/4[1]

In the summer of 1942, the Germans asked Daix to use the famous character professeur Nimbus to contribute to a propaganda operation. Daix then used this opportunity to take up his demands against Opera Mundi. On 4 August 1942 he wrote to the president of the Commissariat général aux questions juives [General Commissariat for Jewish Questions] (CGQJ): “Ma création graphique, le « Professeur Nimbus », m’est demandée afin d’être utilisée pour les besoins de la propagande nationale. Malheureusement et malgré mes efforts, je n’ai pu me libérer d’un contrat draconien signé en 1934 avec Opera Mundi (agence juive) et concernant Nimbus.” [My graphic creation, professeur Nimbus, has been requested from me in order to be used for the sake of national propaganda. Unfortunately and despite my efforts, I have not been able to get rid of a draconian contract signed in 1934 with Opera Mundi (Jewish agency) concerning Nimbus.] Daix attached to his mail an overview of the situation and documents, hoping “qu’une intervention de votre organisme me fera obtenir gain de cause.” [that an intervention on the part of your agency would help me to succeed].[3]

END_OF_DOCUMENT_TOKEN_TO_BE_REPLACED

Tightrope Walker During the Occupation – Part 2/4[1]

To add to his money-related dissensions, the artist had political conceptions. One part of his personality did not show in the drawings that he created for the general press: his ferocious political engagement. Indeed, the artist became a member of the French fascist movement, Francism, shortly after its creation, in September 1933, and he remained a faithful partisan throughout the 1930s and 1940s.

Close to both Mussolini’s Italian fascism and Hitler’s national-socialism, Francism was led by the charismatic Marcel Bucard, a former ultranationalist fighter. His theses were radical: the party attacked Freemasons, Jews (starting from 1936), and Léon Blum, before going after all the capitalists of the US. He is also a self-declared opponent to the parliamentary regime and of the “front socialo-communiste” [social-communist front]. But on the political playground, Francism was mostly isolated and did not have much weight.